There are many strategies and many different ways to interact with your users. Do your users prefer funny messages or more straight-to-the-point communication? It is important to compare different options in order to find out which one works better for your app. AB Testing allows you to run a campaign featuring two or more variations of your message or workflow side by side, each on a set proportion of your campaign audience. By measuring engagement and conversion rates you can get an idea about which variant resonates best with your users as a whole, as well as drill down to find pockets of users who might react better to more targeted or personalised content. It helps you learn what works better with your users allowing you to base your decisions on actual data instead of assumptions and intuition.

Our implementation of AB Testing gives you full control, allowing you to create a workflow where only one word is different, all the way to entirely opposite workflows including send-out times, message formats and frequencies.

With a great tool comes great responsibility. There’s a few things you need to keep in mind in order to get statistically valid results from your experiments.

First, think about what you want to achieve. Your conversion goals are the metrics you will use to determine whether or not one variation is more successful than the other. This should be reflected in the Conversion Goal you select for your campaign. Once you have identified a goal you can generate different ideas and hypotheses that you think might work better than the original version.

Then think about the target audience for your campaign and how you want to run the test. Is it an important seasonal campaign where you want to quickly compare two options in a small percentage of your user base and then use the best options for the rest of the users, or rather a learning experiment where you will use the results to improve your general communication strategy in the future?

Also keep in mind that you will always need a minimum sample size, or in this case number of users, for each variation in order to have statistically significant and valid results from a test. Running a test on a very small group will lead to decisions being made over pure randomness rather than solid data.

Once you know your goal, your audience and your variations, you can proceed to create the campaign in our platform and start running the experiment. Let the campaign run it’s course for some time until you have enough data for the experiment to be significant. Analyze the results and decide on the next steps.

Setting up an experiment

AB Testing is available for any kind of campaign. When creating a campaign, simply click the “A-B Testing” toggle to add workflow variants. You can add as many variants as you want and give each of them a specific weight, which determines the percentage of users that will receive each of the workflows; keep in mind, however, that the more variants you add and less weight you have for each, the more difficult it will be to get enough data to make it significant. Each user is then assigned to one workflow and receives only actions from this workflow for the duration of the campaign.

enable a-b testing and add new variants to your campaign

When adding a workflow, you can start with a new blank workflow if your campaign is not too complex or there are lots of differences between variants. However, you always have the option of using an existing workflow upon which to base your new variant and save a few clicks here and there.

You can set up any number of variants of your message and assign a proportion of the audience from 0-100%.

a note about randomness

Depending on the size of the audience you are targeting, you might not get exactly the distribution you intended, having maybe more of one and less of the other than your settings would suggest.

Think of it this way; if you toss a coin five times, there is a good chance that you will end up with five heads or five tails; the more times you toss the coin, the more likely you will eventually end up with a normal distrubtion of 50% heads and 50% tails.

Target groups are ‘sticky’, which means that once a user has been assinged a certain variant, they won’t be taken out of that group if you change the distribution, only new users will be allocated until your desired spread is matched. This is not the case for users in the control group, giving you the opportunity to run a campaign for a small portion of the target audience and then sending the campaign to users who were initially assigned to the control group if numbers look good. 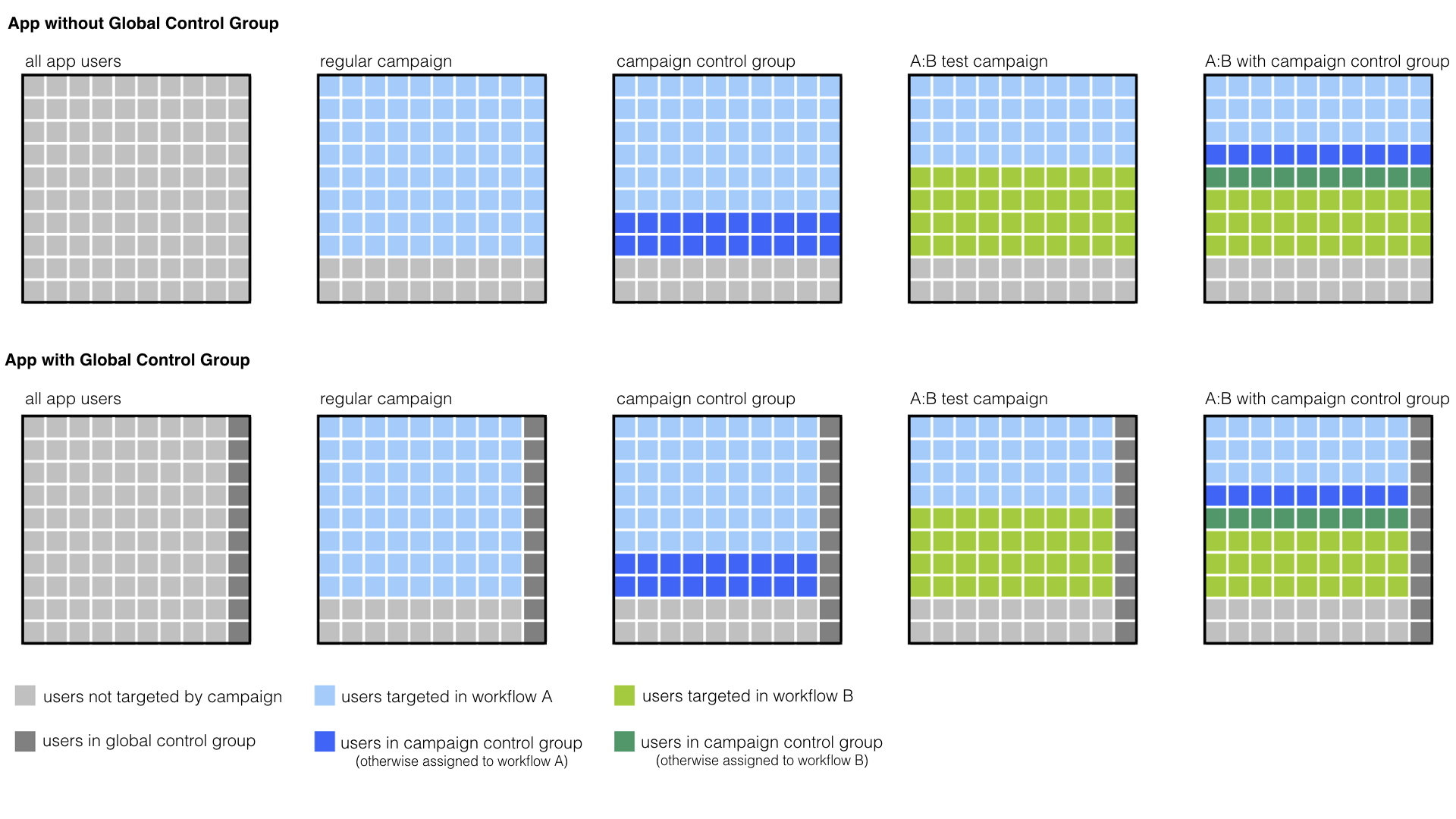 In total, 72% of users receive campaign actions and 28% do not receive any actions.

What kind of experiments can I run?

Our A-B Testing tool is quite flexible, allowing you to create workflows as similar or as different as you want for the same campaign, be it different attached images or slighlty altered wording in the message or contacting users in the morning vs mid-morning, evening or just before bed.

To compare small variations on your message text, simply add all information needed on the workflow as you would do for any campaign, and then use the “Add variation” button to clone the workflow into variant B. Make the necessary adjustment to variant B and you’re done.

If you want to know if your message has an impact at all, you can compare against a control group who is not contacted as part of your campaign, but who would otherwise fit all the criteria. We watch these control users during the course of the campaign to see if and how many of them would be organically inclined to reach the conversion goal without the gentle nudge of a few well-timed push or inapp messages. 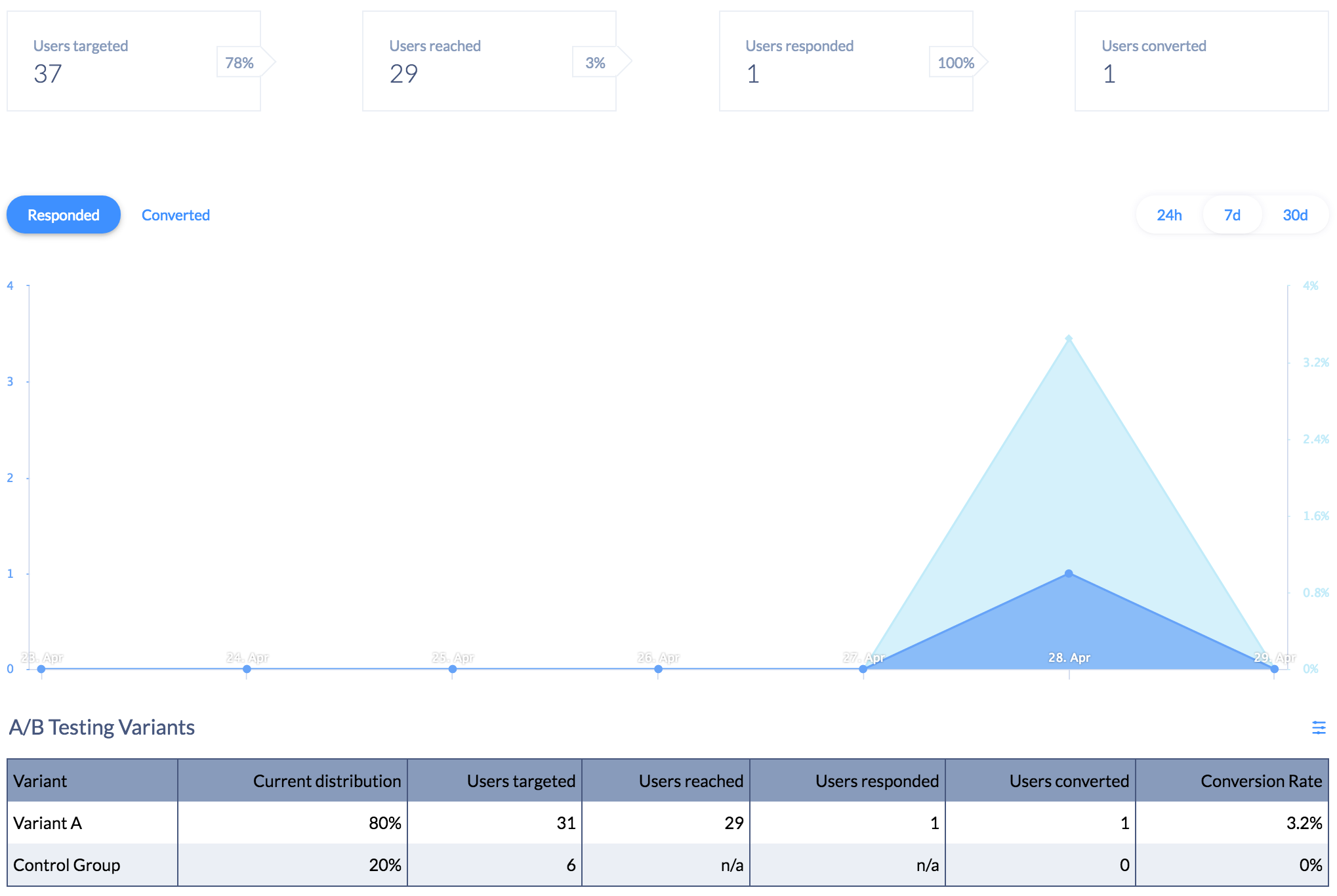 There are many, many mistakes that can be made with AB testing. If you’re investing time into peforming split testing, you don’t want to waste it - so try to avoid falling into any of these traps.